The chromosomes - DNA polymers and their binding proteins - are compacted into a spatially organized, yet dynamic, three-dimensional structure. Recent genome-wide chromatin conformation capture experiments reveal a hierarchical organization of the DNA structure that is imposed, at least in part, by looping interactions arising from the activity of loop extrusion factors. The dynamics of chromatin reflects the response of these polymers to a combination of thermal fluctuations and active processes. However, how chromosome structure and enzymes acting on chromatin together define its dynamics remains poorly understood. In the first part of this thesis, I present my work that combines high-precision microscopy in living Schizosaccharomyces pombe cells with systematic genetic perturbations and Rouse-model polymer simulations, to gain insight into the structure-dynamics relationship of chromatin. I first investigate the model that the activity of two loop extrusion factors, cohesin and condensin, drives chromatin dynamics. Surprisingly, deactivating cohesin or condensin increases chromatin mobility, suggesting that loop extrusion constrains rather than agitates chromatin motion. Corresponding simulations reveal that the introduction of loops is sufficient to explain the constraining activity of loop extrusion factors. Further work shows that the activity of the INO80 chromatin remodeler is critical for ATP-dependent chromatin mobility in fission yeast. These results suggest that thermal and INO80-dependent activities exert forces that drive chromatin fluctuations, which are constrained by the organization of the chromosome into loops.

In the second part of this thesis, I investigate whether the wild type gene locus, mmf1, studied in S. pombe, exhibits one single mode of diffusion, and more generally, how to determine whether a population of single particle tracks, obtained from many different cells, corresponds to a single mode of diffusion. I derive the theoretical equations describing the probability distribution of the displacement covariance, including, the mean, variance, and third central moment of the distribution. Comparing the covariance theory to experimental on trajectories of an optically trapped bead in water, a simulated gene locus, and an experimental gene locus all show good agreement with theory. Importantly, agreement in the case of the gene locus suggests that mmf1 tracks undergo a single mode of diffusion. Moreover, this work sets the framework for a method in which we can verify the number of unique diffusive states a system samples.

Next, I generalize the single-state covariance theory to determine if a population of tracks undergoes multiple states of diffusion, studying the membrane protein, Pma1, in budding yeast Saccharomyces cerevisiae. I then apply perturbation expectation maximization (pEMv2), which sorts trajectories into the statistically-optimum number of diffusive states.

In this case, pEMv2 sorts the Pma1 tracks into two states. To critically assess pEMv2’s performance, I compare the diffusivity and covariance distributions of the experimental pEMv2-sorted populations to corresponding theoretical distributions. The experiment-theory comparisons reveal good agreement, bolstering the pEMv2 approach. Overall, this work develops a template for how to analyze heterogeneous biological diffusion data.

Lastly, I show preliminary work towards reaching the goal of visualizing chromosome loop formation in real-time, through the set-up of a two-color imaging microscope. Data collected of proteins labeled in both red and green fluorescent tags show promise of improving single particle tracking through removing static localization noise, as well as the possibility of imaging a chromosome with two labeled gene loci 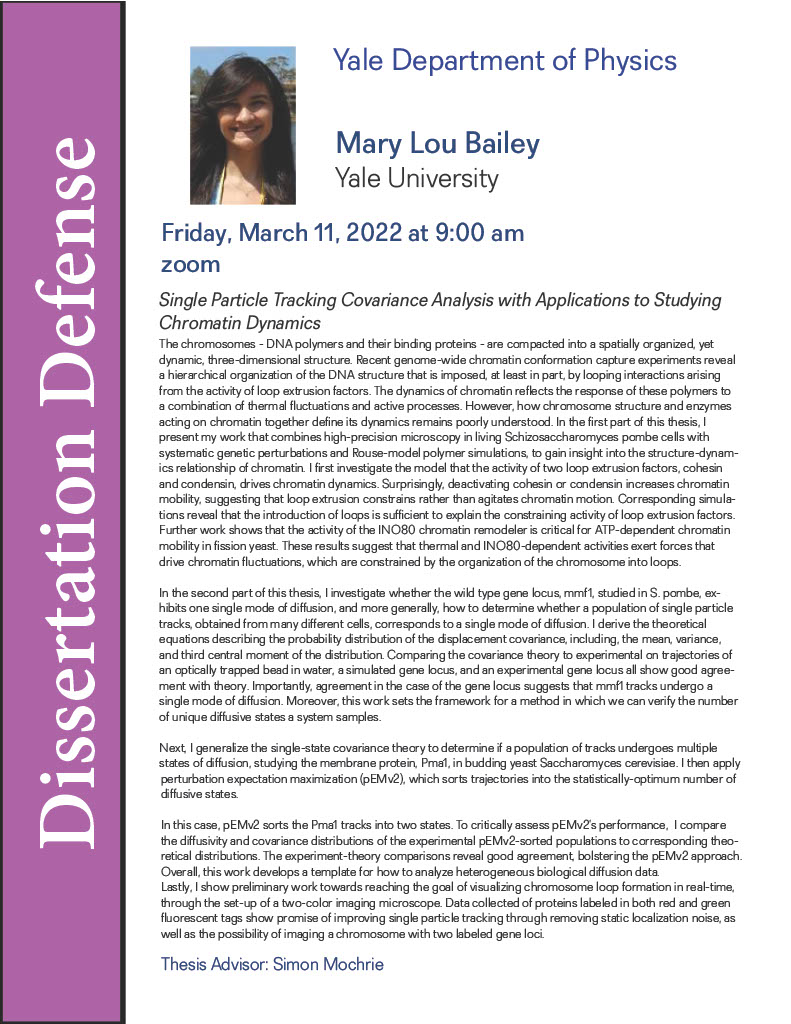