Abstract: In recent years, non-Hermitian degeneracies, also known as exceptional points (EPs), have emerged as a new paradigm for engineering the response of optical systems. At such points, an N-dimensional space can be represented by a single eigenvalue and an eigenvector. As a result, these points are associated with abrupt phase transition in parameter space. Among many different non-conservative photonic configurations, parity-time (PT) symmetric systems are of particular interest since they provide a powerful platform to explore and consequently utilize the physics of exceptional points in a systematic manner. In this talk, I will review some of our recent works in the area of non-Hermitian (mainly PT-symmetric) active photonics. For example, in a series of works, we have demonstrated how the generation and judicial utilization of these points in laser systems can result in unexpected dynamics, unusual linewidth behavior, and improved modal response.  On the other hand, biasing a photonic system at an exceptional point can lead to orders of magnitude enhancement in sensitivity- an effect that may enable a new generation of ultrasensitive optical sensors on chip.  Non-Hermiticity can also be used as a means to promote or single out an edge mode in photonic topological insulator lattices. This effect has been recently utilized to demonstrate the first magnetic free topological insulator laser. In this talk, I will also discuss other topological behaviors in non-Hermitian systems, especially those associated with encircling an exceptional point in parameter space.

Bio: Mercedeh Khajavikhan received her Ph.D. in Electrical Engineering from the University of Minnesota in 2009. Her dissertation was on coherent beam combining for high power laser applications. In 2009, she joined the University of California in San Diego as a postdoctoral researcher where she worked on the design and development of nanolasers, plasmonic devices, and silicon photonics components. Since August 2012, she is an assistant professor in the College of Optics and Photonics (CREOL) at the University of Central Florida (UCF), working primarily on novel phenomena in active photonic systems. She received the NSF Early CAREER Award in 2015, the ONR Young Investigator Award in 2016, the University of central Florida Reach for the Stars Award in 2017, and DARPA Young Faculty Award in 2018. 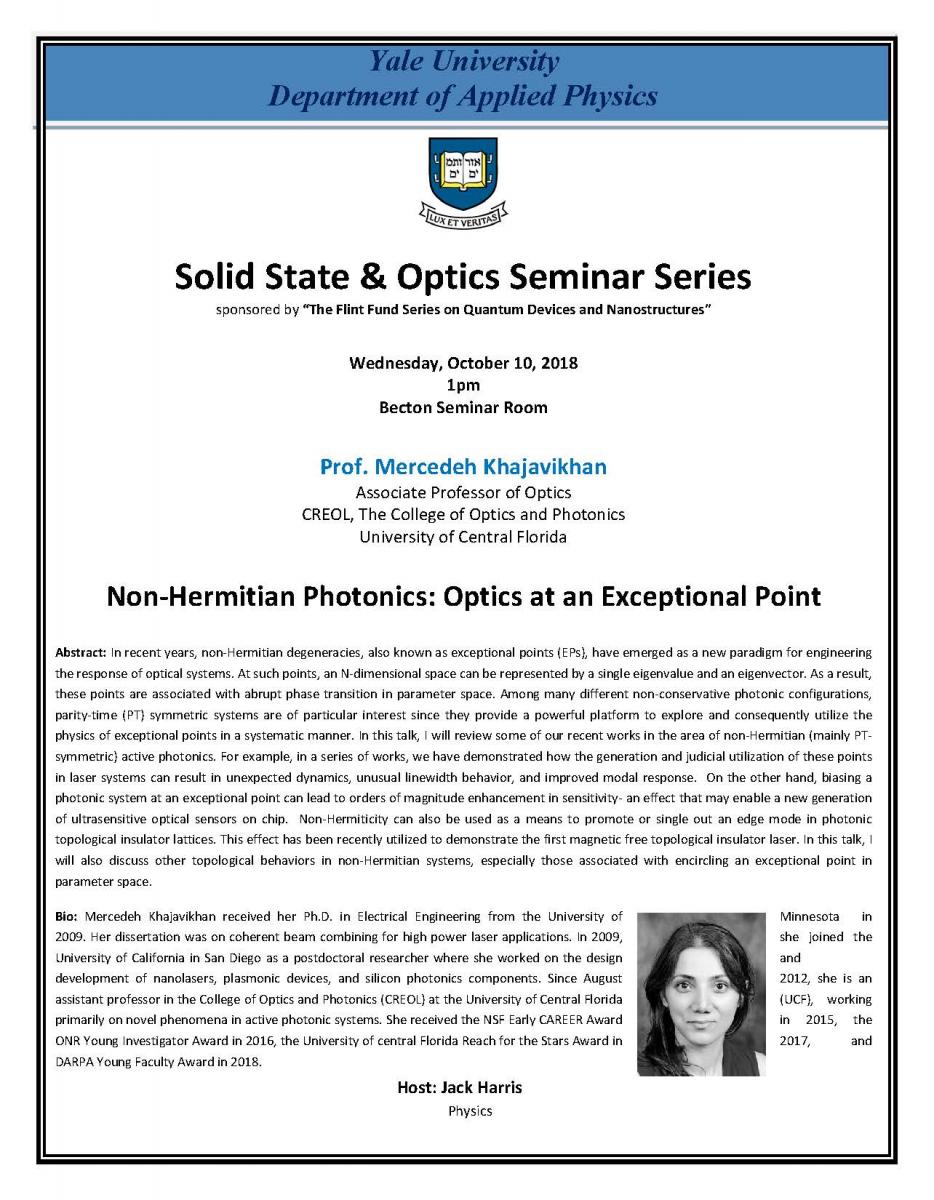