Home » Calendar » Frequency combs in active cavities: broadband sources in the terahertz, mid-infrared, and beyond

Frequency combs in active cavities: broadband sources in the terahertz, mid-infrared, and beyond

David Burghoff is an Assistant Professor in the Department of Electrical Engineering at Notre Dame, where he has been since late 2018. Prior to this, he was a postdoctoral fellow and research scientist at the Massachusetts Institute of Technology (MIT), where he also received his Ph.D. in Electrical Engineering. He has over 40 papers in the area of quantum devices, frequency comb generation, comb spectroscopy, and nonlinear optics, and he is a co-chair of the 2020 and 2022 International QCL School and Workshop. His awards include the NSF CAREER award, the ONR Young Investigator Award, the AFOSR Young Investigator Award, MIT’s Best Electrical Engineering Ph.D. Thesis Award, and the Intelligence Community Postdoctoral Fellowship.

Frequency combs in active cavities: broadband sources in the terahertz, mid-infrared, and beyond

Frequency combs are light sources whose lines are perfectly evenly-spaced, and recent years have seen the development of a number of chip-scale comb sources. Historically, such sources have been based on either classical mode-locking or on the Kerr nonlinearity, but over the last few years, a new class of combs has been developed that instead rely on nonlinearities inherent in materials with gain. Combs based on active cavities require neither slow gain media nor ultra-low loss cavities, and this makes them particularly valuable for longer wavelengths, which lack compact broadband sources.
In this seminar, I will discuss some of our work on combs based on active cavities, with aspects ranging from fundamental physics to new applications. In the first part of the seminar, I will focus on combs based on quantum cascade lasers, active devices that offer unique opportunities in long-wavelength photonics. Dispersion- and bandstructure-engineering were combined to generate the first broadband terahertz frequency combs, which were used to perform the first terahertz dual-comb spectroscopy. I will also discuss how they can be engineered to generate as much as a half-octave of bandwidth and how they can be used to produce isolated pulses. The second part of the seminar will focus on the physics of active cavity combs, particularly on the recent discovery that frequency-modulated combs not only exist, but are ubiquitous. These combs were discovered through the widespread adoption of an experimental technique we developed, and they manifest in many laser systems spanning the electromagnetic spectrum. Recently, we showed that they represent a new fundamental comb state that can be regarded as an inverse of the classical soliton. Finally, I will discuss applications of these combs, emphasizing our recent discovery of frequency comb ptychoscopy. This is a new sensing technique that combines the resolution and speed of classical heterodyne spectroscopy with the bandwidth of comb spectroscopy, and we anticipate that this approach will allow combs to transform remote sensing in much the same way that dual-comb techniques have revolutionized local sensing.
Hosted by: Professor Hui Cao
Event time:
Wednesday, February 9, 2022 - 1:00pm
Presented By:
David Burghoff, Ph.D
Department:
Applied Physics
Hosted By:
Professor Hui Cao 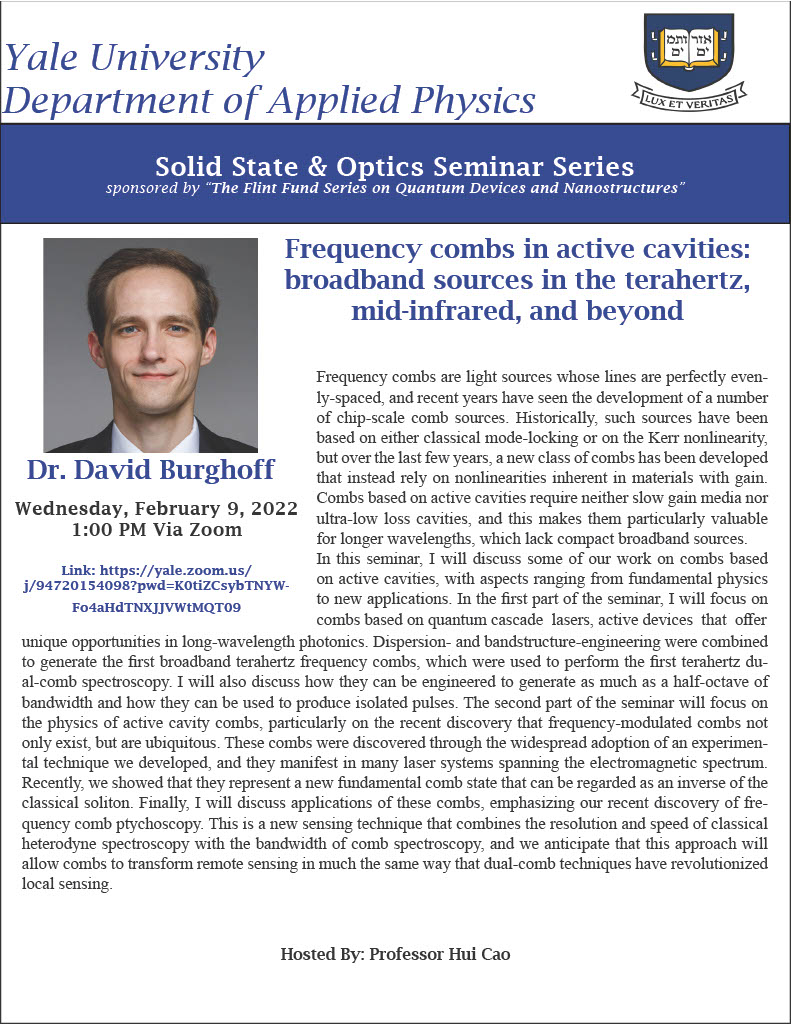