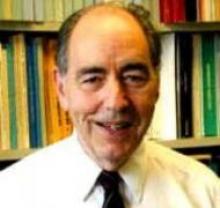 Professor Wolf’s research has been focused over many years on a detailed understanding of magnetic materials. Many were rare earth compounds whose interesting properties are observable only at low temperatures. The work has involved experimental studies of crystal field effects, microscopic spin-spin interactions, cooperative effects and phase transitions. The results frequently provided critical tests of theoretical predictions.

Another material was cerium magnesium nitrate (CMN), which for a time became the thermometric standard for temperatures below 1K.  CMN also turned out to be the first example of a material in which the Orbach two-phonon relaxation process was identified.

Other studies led to the discovery of ferromagnetism in magnetic insulators, initially in dysprosium ethyl sulfate and GdCl3, and later in several rare earth hydroxides that were first prepared at Yale.  Earlier it had been assumed that only metals order ferromagnetically.

The work has also led to a number of new experimental techniques including methods for measuring susceptibilities optically and over a wide range of frequencies, and the use of optical and ultrasonic methods for detecting magnetic phase transitions.

Theoretical papers included one on crystal fields with cubic symmetry that proved widely useful (over 1,600 citations since 1962) for explaining the basic properties of many rare earth compounds.  Another early paper established the framework for relating local ionic anisotropy to macroscopic magneto-crystalline anisotropy.

Professor Wolf was also active as a consultant to a number of industrial research labs and academic institutions, in the organization of many technical conferences, and in policy discussions affecting research and education.