Peter Schiffer, how nanomagnets offer clues to how avalanches work 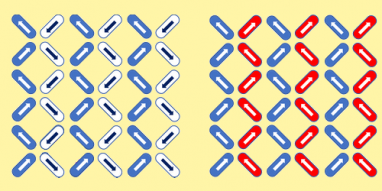 The behavior of avalanches has generated interest among physicists for the insights that they can provide about many other systems, not least of which is how snow falls down a mountainside. To that end, a team of researchers studied microscopic arrays of nanomagnets that provide the first experimental demonstration of a classic theoretical model, known as the “one-dimensional random field Ising model.” The results were published today in Physical Review Letters.

For the study, researchers set up the arrays of nanomagnets in the lab of Peter Schiffer, the Frederick W. Beinecke Professor of Applied Physics, who led the experiment. The nanomagnets, which are a few millionths of an inch in dimension, interact with each other just like two refrigerator magnets put close together. The array is first initialized so that, in alternating rows, half of the nanomagnets had the north pole pointing up and half had the north pole pointing down.

Using a large electromagnet, the team applied a magnetic field to the array, causing a fraction of the nanomagnets to flip their poles and magnetically align in the other direction. To detect the changes, they used a magnetic force microscope that has an extremely small magnetic needle that is either pulled down toward or pushed up away from the magnet, depending on whether it’s going over the north pole or the south.

Among their findings is that the magnet poles flip in clusters along the rows of the arrays, with each microscopic flipping begetting another group of magnets to flip poles - the way that an avalanche works.

It is the first experiment to accurately reflect the random field Ising model in one dimension, which is one of the fundamental models for physicists to describe how things happen in large groups. Specifically, it involves things that can be in one of two states - in this case, things that are either pointing up or pointing down.

“What the model predicts is what that distribution of avalanche sizes should be,” he said. “And that’s what we see very cleanly - we measured the distribution of how the magnet poles flip, and it matches incredibly well what the expectations were.”

One benefit of having a clean experimental demonstration is that carefully designed variations on this well-controlled microscopic system could help researchers understand and predict much more complicated phenomena in the real world, such as how certain materials fall apart when pulled, or what causes electrical breakdowns in circuits.

The study’s co-authors are Nicholas Bingham (lead author), Yale College students Alejandro Simon and Will Zhu, Yale graduate student Xiaoyu Zhang, and collaborators Jungsik Park, Karin Dahmen and Spencer Rooke at the University of Illinois at Urbana-Champaign; and Chris Leighton, Joseph Batley, and Justin Watts at the University of Minnesota.

by School of Engineering & Applied Science