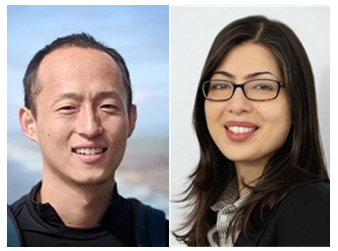 Yu He  joins Yale as Assistant Professor in the Department of Applied Physics. His research mainly utilizes light-matter interaction to investigate functional quantum materials. He focuses on dissecting material’s microscopic behaviors - electronic, lattice and spin - via angle-resolved photoemission spectroscopy, inelastic x-ray and neutron scattering techniques. Complementary techniques such as electric transport, surface decoration and crystal synthesis are employed to characterize and manipulate material properties. Yu obtained his B.S. in Physics from the University of Science and Technology of China (USTC), and his M.S. in Electrical Engineering and his Ph.D. in Applied Physics from Stanford University. Prior to arriving at Yale, he worked as a Miller Research Fellow at the University of California at Berkeley.

Shruti Puri joins Yale University’s Department of Applied Physics as an Assistant Professor. She received a Ph.D. in Applied Physics from Stanford University in 2014, after which she conducted postdoctoral research at the University of Sherbrooke from 2014-2017 and at Yale University from 2017-2020. Her research centers on the theory of quantum information processing and quantum optics. She is interested in the use of these theories to address open questions and applied challenges in the emerging quantum technologies. In particular, her research focuses on designing efficient protocols for quantum error correction, control of open quantum systems, quantum simulations, and quantum algorithms. Recently, she has been interested in harnessing the computational advantage of systems with bosonic quantum statistics. For example, during her postdoctoral research, she developed a robust bosonic quantum bit based on the parametric instability of a driven nonlinear oscillator and showed, for the first time, how such a system can overcome an existing no-go theorem in quantum error correction.